Betrayed Husband —> Are You Caught In The Downward Spiral? Learn The Four Stages Men Move Through After Discovering Their Wives Affair. 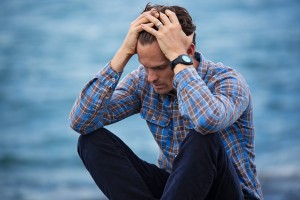 As you’ll learn from reading the stages below, it’s quite common for men to live in limbo for months, and sometimes years, prior to getting divorced—while their wives continue to cheat and have affairs.

Men immersed in Stage One are typically shocked and disoriented. Panic attacks, loss of appetite and extreme difficulty with normal, everyday functioning are quite common. Men at this stage are often frightened and desperate to save their marriages. Unlike at later stages, they are genuinely confused about their wives’ behavior.

Men who don’t completely let go and focus attention on their own healing during Stage One will move into Stage Two—instead focusing laser-like attention on their wives. At Stage Two, a man constantly monitors and analyzes everything his wife says and does, in a desperate search for signs of hope. Consequently, because he is looking only for signs of hope, he is blind to all the obvious signs pointing to his wife’s lack of commitment and to her continued involvement with another man.

Men at this stage tend to view their wives as though they were mysterious and complicated puzzles. In fact, their view is similar to women’s view of men who are either disinterested in them, or unwilling to commit. They spend endless hours obsessing, and analyzing their wives’ behavior, in an attempt to figure out what their wives are “really” thinking and feeling. When not obsessed with gathering information about why women cheat, or about women in general, they are splitting hairs over what constitutes cheating, believing that it matters whether the affair was emotional or physical, whether sex was oral or included penetration, or whether sexual encounters occurred one time or a hundred times.

Unfortunately, men at Stage Two are trying to avoid the real issue: that their wives betrayed them and broke the marital agreement, which in most cases does not involve either partner having an emotional or physical relationship outside of the marriage. Although there is really no mystery to solve, Stage Two men need to invent one in order to distract themselves from pain.

Like so many women who try to decipher male behavior, these men are unaware that analyzing is a defense mechanism. We are all prone, or at least tempted, to analyze when trying to avoid painful feelings. For example, analyzing and circular thinking are both quite common in the first stage of grief—denial. Learn how to master 3 “critical” moments and get your wife back.

(Note: The behavior of men at Stage One and Two is typically passive, pleasing, and compliant.)

Eventually, after observing their wives long enough to see through some of their lies and manipulations, many men move into a third stage, where they begin to strategize. At Stage Three, men use a variety of tactics to coax their wives back into the marriage. They continue to be submissive, and to subject themselves to repeated humiliation, but are now alternately dominant, issuing threats and ultimatums—although they usually have no intention of following through with them. Consequently, their wives continue to cross every imaginary line drawn in the sand.

However, a shift does occur at Stage Three. Although men continue to pursue their wives and may still prefer the option of staying married over getting divorced, the goal changes from wanting to save the marriage to wanting to WIN. Men at Stage Three want to outwit their wives, so to speak, and beat them at their own game.

Unfortunately, Stage Three men are completely unaware that they are caught in the same addiction, chasing the same high, as their wives. Most men (and women) do not know that the fear of rejection, or abandonment, from a spouse or romantic partner triggers the production of certain chemicals in the brain. These chemicals create intense feelings of passion, love and attraction, and this is why both sexes regularly chase after disinterested, uncommitted, unavailable, and sometimes even abusive partners. Put in the simplest and crudest terms, the threat of being rejected or abandoned is a huge and powerful turn-on.

Men at Stage Four have reached a point where they will no longer receive a chemical payoff for winning back their wives. The chemical cocktail that their brains were producing which clouded their thinking, caused them to feel anxious and excited, and drove them toward the goal of winning back their wives has run dry. The automatic scorekeeper that we all have inside our heads has tipped. Men’s have feelings flat-lined, because their wives have finally caused them more pain than pleasure.

Because Stage Four men have crossed the “more pain than pleasure” threshold, the chemicals in their brains are working in reverse. As a result, they start to feel a natural aversion toward their wives and, in some cases, may be totally repulsed by them. However, this doesn’t mean that men at Stage Four are ready to file for divorce. Like their wives, many of these men would rather not take responsibility for ending their marriages. Instead, they continue to live in limbo while waiting for their wives to divorce them.

If you see yourself in the stages, your primary goal is to stop spiraling down. Do an honest assessment to determine whether you can manage your fear and anxiety on your own. If you’re feeling out of control, and your behavior has become compulsive—don’t put off getting the support and step-by-step direction you need to save your marriage. Contact Ashley to learn more about scheduling a consultation.

If you you haven’t read the Women’s Infidelity books, that’s where you need to start. You’ll find out exactly what your wife is thinking, feeling and planning—so you can stop analyzing—and stop operating from a mindset that leads to divorce. Note: All book orders include a FREE COPY of “Save Your Marriage Now!” (For Men).