How Women End Marriages —> Did You Know There Are Two Distinct Ways To End A Relationship? Learn The "Passive" Style Women Use To Divorce Their Husbands. 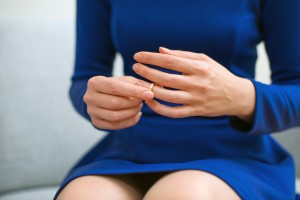 Why Women Wiggle Their Way Out Of Relationships

In his book, Transitions, William Bridges asks his readers the following question, “Looking back over your ending experiences, what can you say about your own style of bringing situations to a close? Is it abrupt and designed to deny the impact of the change, or is it so slow and gradual that it’s hard to see that anything important is happening? Do you tend to be active or passive in these terminal situations?”

Rejection can trigger anger and even rage inside a jilted romantic partner — and this is why females (the physically weaker sex) are hard wired to end relationships passively.  As John Lee tell us in his book, The Half Lived Life, “Passive people constantly feel that something or someone is much stronger than them.”

Today, most women in Western society don’t live in fear of men; but this is definitely something new. In the past, ending a relationship was dangerous for females and, at root, this is why females transition their romantic partners into friends; it’s simply to avoid arousing anger in males.

Unfortunately, transitioning someone from a romantic relationship into a friendship can take a long time — and it can cause a whole lot of confusion and unnecessary pain and suffering, too. As I explain in Women’s Infidelity II, women often use or, at least, attempt to use the same approach to end their marriages that they used on their boyfriends prior to getting married. The problem, however, is that the process of “turning a romantic partner into a friend” doesn’t work on husbands in the same way that it works on boyfriends. Below is an excerpt from Women’s Infidelity which describes the four stages women move through before divorcing their husbands.

THE FOUR “STAGES” WOMEN MOVE THROUGH BEFORE DIVORCING THEIR HUSBANDS

STAGE ONE —> Women at Stage 1 feel as though something is missing in their lives. They have all the things that they wanted—a home, a family, a great husband—but they feel they should be happier. Over time, many women in this stage begin to lose interest in sex. It is not uncommon for them to spend a great deal of energy trying to avoid physical contact with their husbands because they fear it might lead to a sexual encounter. They frequently complain of physical ailments to avoid having sex and often try to avoid going to bed at the same time as their husbands. They view sex as a job, not unlike doing the dishes or going to the grocery store. Some women in Stage 1 claim they feel violated when their husbands touch them. Their bodies freeze up and they feel tightness in their chest and/or a sick feeling in their stomach. The majority of women in Stage 1 feel as though there is something wrong with them, that they are in some way defective. They are also fearful that their disinterest in sex will cause their husbands to cheat, or worse yet, leave them.

Unable to end their extramarital relationships, women at Stage 3 conclude that their lovers are soul mates because they are unaware that they have become addicted to the high caused by chemicals released during the initial stages of a relationship. Many live in a state of limbo for years. “Should I stay married or should I get a divorce?” this is the question continuously on the minds of women at Stage 3 – it is also common for women at this stage to attempt to initiate a separation. In most cases, husbands of women at Stage 3, will launch futile attempts to make their wives happy by being more attentive, spending more time at home and helping out around the house. Regardless of women’s past and present complaints, the last thing women at Stage 3 want, is to spend more time with their husbands. The reason many women will give for their desire to separate is a “search for self.” They convince their husbands that they might be able to save their marriage if they can just have time to themselves. They tell their husbands that time apart is the only hope of improving their current situation.

Women at this stage want to free themselves of the restrictions of marriage and spend more time with their lovers. Most think that eventually their confusion will disappear. They think they will eventually know with certainty whether they want to stay married or get divorced and be with their lovers. Separation allows women at this stage, to enjoy the high they experience with their lovers without giving up the security of their marriages. Husbands of Stage 3 women are often unaware that their wives are having affairs. Their lack of suspicion is typically due to their wife’s disinterest in sex and in their belief that their wife is a “good girl.”

Women at Stage 3 may also be experiencing the ending of an extramarital affair, and the ending may not have been their decision. They may have been involved with single men who either lost interest because the relationship could not progress or who became attracted to another women who was single. Women whose affairs are ending often experience extreme grief. They may become deeply depressed and express tremendous anger toward their husbands. They are typically unaware that they are experiencing chemical withdrawal due to sudden changes in their brain chemistry. As a result, many will feel that they have missed their chance at happiness due to their indecisiveness. Believing they have become more aware of what they want and need from a mate, women at this stage will often place the utmost importance on finding a “new” relationship that will give them the feeling they experienced in their affairs. A new relationship with a new partner will also represent a clean slate, a chance for these women to regain their “good girl” status. Some women will search for new partners during their separations. Others will return to their marriages, but not emotionally and still continue to search. Some women will resume sporadic sexual relations with their husbands in an effort to safeguard their marriage until they make a decision. Although they are often not sexually attracted to their husbands, desire is temporarily rekindled when they suspect their husbands are unfaithful, are contemplating infidelity, or when their husbands show signs of moving on.

STAGE FOUR —>The women in stage four included those who chose to stay married and continue their affairs and those who chose to divorce. Some of the women who continued their affairs stated that marital sex was improved by maintaining the extramarital relationship. Some thought the lover was a soul mate, but for one reason or another did not leave their husband and did not feel torn between the two. Others realized that their feelings were intensified by not sharing day-to-day living arrangements with their lover. Almost all of the women in this latter category were having affairs with married men. They believed their affairs could continue indefinitely without disrupting either partner’s primary relationship. The women who chose divorce and were in the beginning stages of a new relationship typically expressed relief at having finally made a decision and reported feeling normal again. Many of the divorced women who had remarried and were several years into their new marriages seemed somewhat reluctant to talk about the specifics of their past experiences. However, they did mention feelings of guilt and regret for having hurt their children and ex-spouses only to find themselves experiencing similar feelings in the new relationship.

• How to know if your feelings for the other man are real
• How to understand your feelings for your husband – what it really means when you say, “I love him, but I’m not “in” love with him
• How to know if there’s a possibility for a future with the other man
• How to stop your circular thinking
• How to end your confusion and move forward in 7 clearly defined steps
• Men: This book is for you, too. In this book, you’ll learn how women process infidelity. Find out exactly what your wife is thinking, feeling and planning.