Is Your Wife Still Talking To Her Affair Partner? Learn How To Set Boundaries After Your Wife Cheats And Avoid Getting Talked Into Accepting —> Unacceptable Behavior. 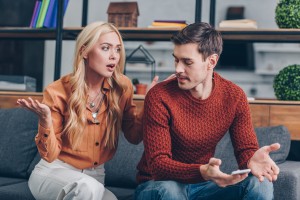 Is Your Wife Still Talking To Her Affair Partner?

During a recent consultation, Dylan (not his real name) said, “I really need to reinforce boundaries with my wife. My wife is still talking to the guy she had an affair with, and she doesn’t think it’s a big deal. But I don’t think she should be talking to the guy — and that’s why I wanted to talk to you. I need you to tell me how to reinforce boundaries with my wife.”

Shortly into our conversation, it was apparent that Dylan wanted someone to tell him the right words to say to his wife that would automatically trigger her to stop doing the behaviors he didn’t like.

Unfortunately, like many people, Dylan didn’t understand the process of setting boundaries and that’s why issues were still arising in his marriage around his wife’s affair.

You see, this was the REAL issue and nothing in Dylan’s life would change until he was willing to confront and resolve the REAL issue.

Setting a boundary requires you to shift your focus away from what your wife is doing and/or from what you would like her to do, to “what you are going to do” if the unwanted behavior continues.

I explained to Dylan that he couldn’t reinforce boundaries with his wife because had no idea what he was prepared to do in response to his wife’s behavior.

I also told Dylan that his wife wouldn’t take him seriously, until he was serious; serious enough to get clear in his mind about what he was prepared to do if his wife continued to talk to her former affair partner.

Do An Honest AssessmenT. Do You Feel Powerless?

Do an honest assessment to determine whether you can get clear about your boundaries on your own. If you’re feeling powerless or unsure of yourself—don’t put off getting the support and step-by-step direction you need to regain your footing. Contact Ashley to learn more about scheduling a consultation.

If you you haven’t read the Women’s Infidelity books, that’s where you need to start. You’ll find out exactly what your wife is thinking, feeling and planning—so you can stop analyzing—and stop operating from a mindset that leads to divorce. Note: All book orders include a FREE COPY of “Save Your Marriage Now!” (For Men).